The Time-Traveling Fashionista by Bianca Turetsky 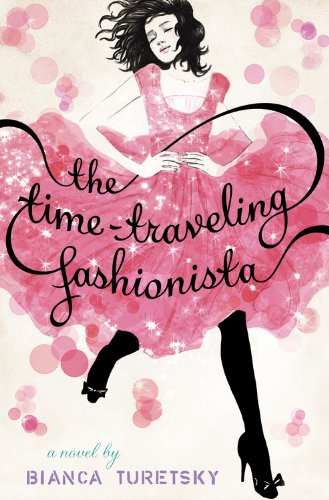 Louise Lambert loves vintage clothes.  When she gets a personal invitation to a traveling vintage fashion show, she's thrilled.  It will be the perfect place to get a dress for the 7th grade dance!  Much to Louise's surprise, when she tries on a beautiful pink dress she finds herself back in the time-period of the original dress owner.  Now Louise is on board a ship in 1912, and everyone thinks she's a movie star.  Louise is having a great time, until she discovers she's on board the Titanic...

This was very cute.  At first, I thought it was going to be another book about a tween or teenager yearning after expensive clothing and lots of brand name dropping.  It wasn't though.  Louise like vintage clothing because of the uniqueness of each individual piece.  She doesn't want to shop at the mall and buy a dress that hundreds of other people could also get.  She wants to search and find something special and think about what went in to making it and who the person was who wore it first.  So it was kind of nice.  She wasn't after what was the fanciest of most expensive.  Louise cared about the individuality and the story.

We do get some vintage clothing history, and learn some names of designers.  On board the Titanic (actually, she was really there) was designer Lady Cosmo Duff Gordon.  Louise gets to meet her and is very excited since she's read about her.  Lady Cosmo Duff Gordon is famous for saying to her secretary, as she watched the boat sink from a lifeboat, "There is your beautiful nightdress gone."

Louise has fun wearing beautiful clothing and hats from the early 1900s and having people think she's a movie star, but she learns that really she just wants to be herself.  Louise gets off the Titanic safely, don't worry.

This is going to be a series.  In the next book Louise will be going back to the French Revolution.  How far back does "vintage" go?  Louise taught me that it starts in 1980, but didn't say where it ended.  Aren't we getting into "antique" by the time we hit the French Revolution? *

The Time-Traveling Fashionista will be available April 5th.

*Fashion-Era.com tells me that "vintage" is anything that is between 20 years to 100 years old.  Anything older than that is "antique."  If it's more recent than 20 years, it's not vintage yet.
Posted by Arianna at 1:29 PM