Once a Witch by Carolyn MacCullough 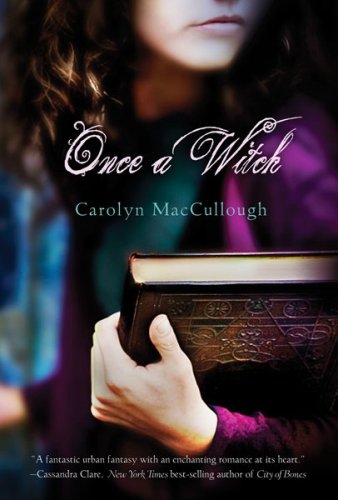 Tamsin Greene is a disappointment. At birth she was prophesied to be the beacon of her witchy family, but as luck would have it Tam never got her power. She grows up feeling judged for being 'normal' and compared to her powerful, beautiful and perfect sister Rowena. So she rebels by staying away from her family and the commune.

While home for her sister's handfasting party and manning the family-run store, a young professor comes in asking for help, Tam's perfect sister's help. He's looking for a clock, a family heirloom as it were, and wouldn't it be great if Rowena could find it? This is the first time that Tamsin has felt important and capable, so she conveniently forgets to mention that she isn't Rowena. Instead she figures she can use her non-existent sleuthing skills to find it, and perhaps get assistance from her estranged childhood friend (who just happens to be a hottie that can play the guitar, what a happy coincidence) who fortuitously has the power to find anything. As Tam starts to unravel the mystery of the lost clock, she also discovers that nothing is as it seems. And some lies are easier to forgive than others, especially when your sister and best friend's lives are at stake.

I liked this book. It took a bunch of the cliches that you would expect in a book like this and twisted them. All of a sudden, fresh and new! Yes, she has the hottie love interest, but she isn't obsessive. He isn't the stud muffin that will never enter her life again. Yes, she is filled with teen angst and unnecessary sarcasm, but you can tell she loves her family and most of her angst is somewhat understandable. I don't want to give away the action-y part, but well done Carolyn MacCullough, well done indeed. There wasn't a slow point in the entire book, but when there was action it was quite thrilling. Thrilling I say! This seems like a short review I know, and it might seem like damning with faint praise, but I enjoyed this book. It was really well done and I'm excited for the sequel Always a Witch that comes out on Aug. 1, 2011.
Posted by Unknown at 8:01 PM